South Africa attracts travelers from all over the world by offering a richness in natural beauty, culture and cuisine that even its remote location cannot deter.

South Africa has one of the greatest variety of attractions to offer its guests. From a wild encounter with the king of the savannah, entering the unknown territories of the great white, admiring the breathtaking scenery, learning about their vibrant culture, or enjoying a mouth-watering culinary experience paired with the perfect glass of wine, you will be sure to find something to satisfy your curiosity. 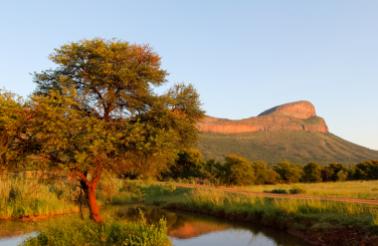 Entabeni lies in the middle of the magnificent Waterberg ridge in the Limpopo province, north of Pretoria. The private reserve forms an independent part of the UNESCO-accredited Waterberg Biosphere Reservation and is potentially the most beautiful landscape in all of Southern Africa. Here, there is permanent water year-round, magnificent nature with ravines, cliffs, and waterfalls as a unique addition to the Big Five.

Entabeni lies outside of the malaria zone and is one of South Africa’s most peaceful oases without masses of tourism, but with rich wildlife and bird life.The area is a typical highland with cold nights – especially the period from May to September – but with lovely sunny days all year round.

Cape Town is the legislative capital of South Africa, and the second most populous city, after Johannesburg. It is often referred to as Mother City, due to the fact that it was the first European settlement in South Africa. The region is characterized by a mountainous range, extensive coastline and inland valleys. Table Mountain, along with Lion’s Head and Devil’s Peak on either side of it, form a majestic mountainous backdrop surrounding the central area of Cape Town, known as City Bowl. The contours of the mountains in the city also form their urban geography, by dividing its’ suburbs.

The city has recently enjoyed a booming economy, making it Africa’s third main economic hub city.  Cape Town’s natural and cultural features have attracted a lot of tourism in recent years, with the possibility to hike its numerous peaks, relax by the beach, or hop on a boat to visit Robben Island.

Cape Town has a mild Mediterranean climate, with dry, warm summers from December to March and moderate, slightly wet winters from June to August.

The private Manyeleti Wildlife Sanctuary is adjacent to Kruger National Park and is today part of this gigantic wildlife reserve. Under apartheid, Manyeleti was reserved for South Africa’s colored population, but today the fence between the two reserves has been torn down and the game roams freely. Unlike the rest of Kruger, real infrastructure has never been developed in Manyeleti, so it is wonderfully free of wide roads and asphalt. Here, you’ll still drive in wheel tracks and get stuck in the muck. To the delight of Albatros guests, there are few visitors and many animals here, who prefer the peaceful settings.

Kruger is an area with lots of sun and relatively high temperatures during the day year-round – therefore, it’s also possible to visit this area year-round.